Researchers have made a breakthrough in the development of "green gasoline," a liquid identical to standard gasoline yet created from sustainable biomass sources like switchgrass and poplar trees.

In the same issue, James Dumesic and colleagues from the University of Wisconsin-Madison announce an integrated process for creating chemical components of jet fuel using a green gasoline approach. While Dumesic's group had previously demonstrated the production of jet-fuel components using separate steps, their current work shows that the steps can be integrated and run sequentially, without complex separation and purification processes between reactors.

While it may be five to 10 years before green gasoline arrives at the pump or finds its way into a fighter jet, these breakthroughs have bypassed significant hurdles to bringing green gasoline biofuels to market.

"It is likely that the future consumer will not even know that they are putting biofuels into their car," said Huber. "Biofuels in the future will most likely be similar in chemical composition to gasoline and diesel fuel used today. The challenge for chemical engineers is to efficiently produce liquid fuels from biomass while fitting into the existing infrastructure today."

For their new approach, the UMass researchers rapidly heated cellulose in the presence of solid catalysts, materials that speed up reactions without sacrificing themselves in the process. They then rapidly cooled the products to create a liquid that contains many of the compounds found in gasoline. 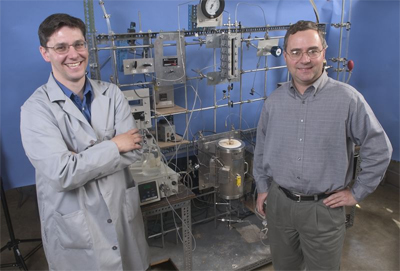 James Dumesic of the University of Wisconsin-Madison and his former student George Huber, now at the University of Massachusetts-Amherst, are breaking new ground in the development of an alternative fuel called "green gasoline."

The entire process was completed in under two minutes using relatively moderate amounts of heat. The compounds that formed in that single step, like naphthalene and toluene, make up one fourth of the suite of chemicals found in gasoline. The liquid can be further treated to form the remaining fuel components or can be used "as is" for a high octane gasoline blend.

"Green gasoline is an attractive alternative to bioethanol since it can be used in existing engines and does not incur the 30 percent gas mileage penalty of ethanol-based flex fuel," said John Regalbuto, who directs the Catalysis and Biocatalysis Program at NSF and supported this research.

"In theory it requires much less energy to make than ethanol, giving it a smaller carbon footprint and making it cheaper to produce," Regalbuto said. "Making it from cellulose sources such as switchgrass or poplar trees grown as energy crops, or forest or agricultural residues such as wood chips or corn stover, solves the lifecycle greenhouse gas problem that has recently surfaced with corn ethanol and soy biodiesel."

Beyond academic laboratories, both small businesses and Fortune 500 petroleum refiners are pursuing green gasoline. Companies are designing ways to hybridize their existing refineries to enable petroleum products including fuels, textiles, and plastics to be made from either crude oil or biomass and the military community has shown strong interest in making jet fuel and diesel from the same sources.

"Huber's new process for the direct conversion of cellulose to gasoline aromatics is at the leading edge of the new ‘Green Gasoline' alternate energy paradigm that NSF, along with other federal agencies, is helping to promote," states Regalbuto.

Not only is the method a compact way to treat a great deal of biomass in a short time, Regalbuto emphasized that the process, in principle, does not require any external energy. "In fact, from the extra heat that will be released, you can generate electricity in addition to the biofuel," he said. "There will not be just a small carbon footprint for the process; by recovering heat and generating electricity, there won't be any footprint."

The latest pathways to produce green gasoline, green diesel and green jet fuel are found in a report sponsored by NSF, the Department of Energy and the American Chemical Society entitled "Breaking the Chemical and Engineering Barriers to Lignocellulosic Biofuels: Next Generation Hydrocarbon Biorefineries" released April 1 (http://www.ecs.umass.edu/biofuels/). In the report, Huber and a host of leaders from academia, industry and government present a plan for making green gasoline a practical solution for the impending fuel crisis.

"We are currently working on understanding the chemistry of this process and designing new catalysts and reactors for this single step technique. This fundamental chemical understanding will allow us to design more efficient processes that will accelerate the commercialization of green gasoline," Huber said.