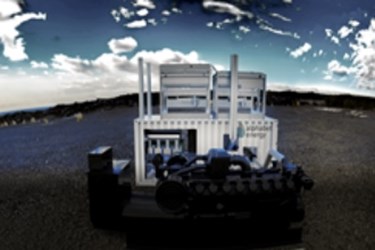 The company’s first product, called the E1, attaches to an exhaust stack and uses Alphabet’s patented thermoelectric materials to convert waste heat into electricity. Thermoelectrics use a temperature differential to generate electricity in the solid state. This product introduction is the first for the company, which was founded in 2009 at Lawrence Berkeley National Laboratory.

The E1 generates up to 25 kWe per 1,000 kWe engine, saving 52,500 liters of diesel fuel per year, per engine. Alphabet Energy has already taken multiple orders for the E1, which has gone through extensive customer testing in the field.

“Today we’re making history and marking a milestone in industrial energy efficiency with the introduction of the E1,” said Alphabet Energy CEO and Founder Matthew L. Scullin. “People have been trying to make an industrial-scale thermoelectric generator for a long time. Customers want waste-heat recovery solutions that are simple pieces of industrial equipment rather than complex power plants.”

“With the E1, waste heat is now valuable,” Scullin added. “Saving fuel has the potential to be one of the biggest levers a company has in reducing operating expenses. That potential is finally realized with the E1, the world’s first waste-heat recovery product that meets the mining's and oil & gas industry’s criteria for simple, strong, and reliable solutions.”

While NASA has used thermoelectrics since the 1950s, high materials costs made them prohibitive for wider use. However, Alphabet’s proprietary advancements in silicon and tetrahedrite have enabled the company to create the first highly efficient thermoelectric materials that use abundant resources. Thermoelectrics are unique because they are solid-state; which means the E1 operates with technology that has no moving parts, no working fluids and requires minimal maintenance.

Compared to other waste heat recovery systems, the E1 requires only minor up front engineering scope and no operation by the customer. This makes it ideally suited for remote and industrial applications where ongoing system support capacity is limited.

The E1 requires no engine modifications and is installed with a simple process that involves only exhaust coupling and electrical hookup. Standard connection can be completed in as little as two hours of previously scheduled engine downtime. All updates to the host engine’s exhaust system are performed within a standard engine maintenance service interval. The E1 complies with all major engine manufacturer backpressure limits and warranty specifications.

Images and a video of the E1 are available at http://www.alphabetenergy.com.

The E1 is first in a series of planned products designed for waste-heat recovery. Alphabet Energy’s thermoelectric materials are a platform technology with a wide array of applications including power generation associated with automobiles, trucks, locomotives, mining equipment, ships, jet engines and factory exhaust flues.

Based on groundbreaking materials science R&D at both the Lawrence Berkeley National Laboratory and Michigan State University, Alphabet Energy has over 50 patents issued or pending. The top caliber team combines many of the most reputable minds in thermoelectrics and materials science with experts who have decades of experience from the oil & gas, automotive, and power generation industries. Alphabet Energy has raised over $30 million in funding from top investors including TPG and Encana.