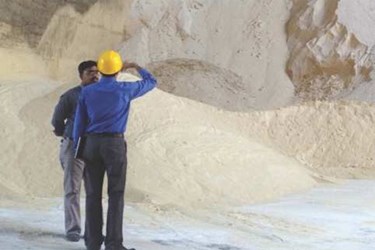 Advanced laser-based instrumentation now makes possible accurate inventory management of granular stockpiles. The sophisticated system from ABB, called the VM3D volumetric Laser Scanner, accurately measures the volume of variously shaped piles of material. The stockpiles may be stored out in the open or in large structures like silos, bunkers, domes, and sheds.

Premier applications in South Africa 79 scanners measuring fertilizer bunkers at Omnia Fertilizer (a division of the Omnia Group), one of the fertilizer producers in South Africa. Tongaat Hulett starch is a premier producer of starch and glucose in Africa. Their Kliprivier mill is the newest of the mills and is the technological hub of Tongaat Hulett Starch and also where the ABB Volumetric Scanner System was pioneered to measure the volume of maize in silos. At the Gold Fields South Deep Gold Mine, the ABB Volumetric Scanner System is used to measures mineral ore in a large external stock pile for daily operations planning. The system can be applied to virtually any granular stockpile in industries such as mining, agriculture, coal, quarry, plastic pellets, and bulk chemicals.